99 Problems But Not Enough Projects Ain’t One

As the summer draws to a close, I’m reminded of all the projects I wanted to finish but didn’t. (I did manage to finish one shawl, but haven’t gotten around to taking pretty pictures because you know, Netflix/Hulu binging!) When I first started knitting, I did a great job of being the type of knitter who only works on one project at a time. I didn’t start the next one until the current one was finished. 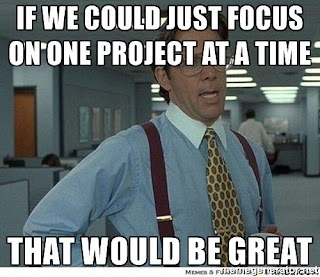 But as I became more and more obsessed with my new hobby, suddenly one project didn’t cut it anymore. I wanted to work on a complicated project when I was at home, but I also needed a mindless project that I could take out with me while I was socializing. I will forever be in awe of anyone who can knit lace and chat at the same time.

Projects started piling up as I started things, got bored, then moved on. Every now and then, I’d get overwhelmed with the amount of projects I had going at once and then spend a day going through them all and frog the ones I knew I’d never finish. 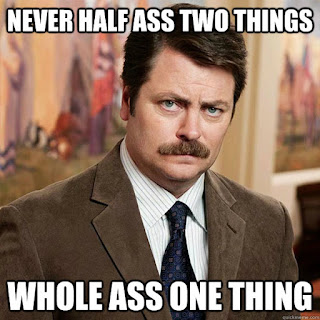 I used to feel guilty about starting a new project if I hadn’t finished others. It was often cathartic to frog my projects because then I felt free to start new ones since I pulled others out. But now, I don’t really care.

I’ve taken the attitude that it’s my hobby and I do what I want. I probably have at least 20 projects in various states going right now. A few weeks ago I did do my yearly frogging and got rid of some (like the pair of socks I started for Tour de Sock last year, but then became depressed when I saw there were knitters who could finish a whole pair of socks in a day and gave up knitting mine.)

So I recently started two new projects, despite the others I have going. I can’t show one of them yet, but I did want to talk about the cropped cardigan I’m working on.

I came across the book 6,000+ Pullover Possibilites at Barnes and Noble, and immediately bought it.(not an affiliate link, just one that shows you the book if you haven’t heard of it. I’ll do a full review of it in a later post.) I’ve been jaded with a lot of sweater/cardigan patterns of Ravelry, because I rarely find ones that I feel the need to knit, because they’re not me. Enter this fantastic book!

I love that I can put the pieces together myself. It can take a bit of prep work because you have to know your gauge, and then if you’re obsessive like me, you need to type out the whole pattern because flipping back and forth to different pieces gets old quick. But once I have all the prep work out of the way, it’s well worth it, to me, to get a finished object that fits both my body and my personality.

I do wish there were already cardigan modifications in it, because I tend to get way more use out of those than I do pullovers. But it’s not hard to modify with a little math (my worst enemy, but it’s worth confronting for knitting.)

Now I’m happily along the way working on a cardigan influenced by Pinkie Pie from My Little Pony: Friendship is Magic. I already had the yarn (Frolic Sport in Bourbon Rose by Sunrise Fiber Co., held together with Drops Glitter in Gold for a little bit of sparkle.) but I’m nervous that I don’t have enough for the length I want. This will be my project for a fall knit-along in the yarn dyer’s Ravelry group. (Linky because there’s still time to join in the fun if you’d like!) 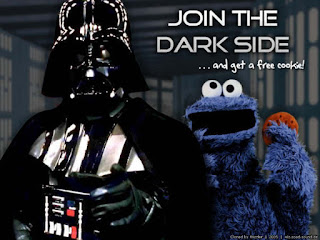 I did a provisional cast on to avoid doing the ribbing first, and then just got straight to the body. Once I knit the back and both front pieces, I’ll put those together, knit the sleeves, and the go back and do the ribbing. If I don’t have enough of the main yarn, I’ll use a contrasting color.) I am a little ashamed at how long it took me to figure out to knit it this way, rather than trying to do the math to figure out my estimated yardage, but I’m glad I took the time to think it over instead of jumping straight in and casting on. 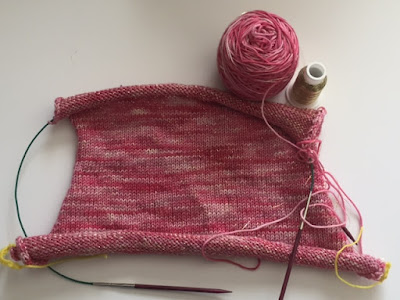 I’m loving the way the gold pops through just a little bit. It’s working up faster than I expected it to, so I’m almost done with the back. Once I’m finished, I’ll post a little tutorial of how I made it. Crossing my fingers that I won’t get too distracted by other projects and actually have it finished soon! (although I did just start a new pair of socks for Tour de Sock, because despite my experience last year, I am a glutton for punishment.)