It’s a Knitter’s Life in the Frog Pond

Yesterday, I posted this photo to my Instagram as a sneak peek of my next design I intend to publish: 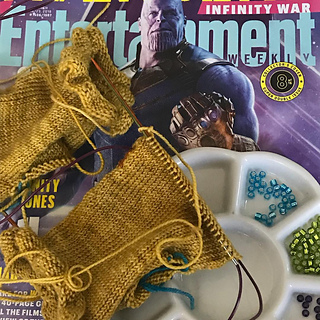 Unfortunately, later that evening, it all came undone.

I had already begun the picot bind-off on the first glove, when I proudly tried it on for my husband to show off how “amazing” it looked. And then I noticed it. A mistake that I did my best to ignore. “It’s fine,” I told myself. “It still looks good.” But then I kept looking at it and looking at it, and it just bothered me too much to keep going. 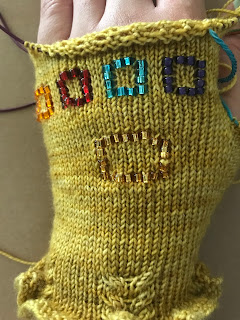 If it isn’t as glaring to you as it is to me, it’s the fact that the large “stone” isn’t centered in the middle of the four that go across the knuckles like it’s supposed to. So then I tried to do the thing where I just dropped the stitches in the rows that needed to be fixed, but my skill at that isn’t the greatest, so it started to look even worse. Now it’s back to square one. 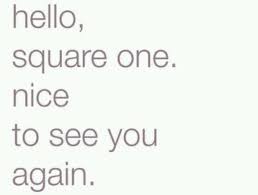 I remember the first time I frogged (ripped out for you muggles) a project because I just didn’t like the way it was turning out. Even though I followed the pattern exactly, it wasn’t turning out like the project pictures. So out it all came. My husband was horrified. he couldn’t believe that I had spent so much time working on something only to rip it all out. I just shrugged. It didn’t matter to me that I had spent time on it, only to rip it out, because I had still spent time working on my hobby, and I enjoyed that time. 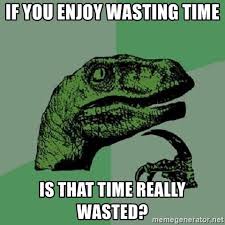 And I still do this. Every now and then, I’ll go through my gigantic pile of works in progress (WIPs for you muggles) and decide that I’m no longer interested in finishing certain projects and frog them. It’s a fairly cathartic process, because sometimes I get so bogged down by the fact that I have at least 20 WIPs going at any point in time, that it helps to just clear them out every once in a while.

I was told once that there are two types of knitters: process and product. The former knits because they just enjoy the act of knitting itself, never caring if they actually finish anything. The latter is the unicorn that knits one project at a time, finishes it, then moves on to the next one. They are focused on the end result and the usable product.

I don’t believe that it’s as black/white as that. I definitely fall somewhere in between. With my personality type, once I get an idea in my head, I can’t move on until at least I’ve started working on it, not matter how many other WIPs I have at the moment. I do care about having a physical object and useful product when I’m done knitting, but I also thoroughly enjoy the process. If I didn’t, I doubt I’d still be knitting at this point in my life. But the amount of WIPs I have shows that I don’t knit purely for the products (maybe a post showing exactly how many I have later…)

In this case, it is about the product. It’s an idea I had that I really want to make happen. So it’s back to the beginning. Maybe not tomorrow, though, because I do this irrational thing where I get annoyed at the project, even though it’s my fault. Of course it’s the inanimate project’s fault, and not my error, so it needs to go into timeout. But I still plan on having it completed by the end of April, so hopefully soon. But I probably need to go work on one of these other WIPs tomorrow for a breather before I get back to it. Sometimes, space can be a glorious thing.

Honestly, I’ve started/stopped this post so many times, I almost forgot the whole purpose of it. (Can you tell I get distracted easily?) The point is, knitting is great because it’s a “safe” way to fail. You can fail, frog, start back over, and then maybe the second, or third, or fourth try, it works out, and then you have this gorgeous object that you created. Failure is hard. It’s hard not get discouraged when something doesn’t go right the first time.

Knitting has given me the strength to be willing to fail in other areas of my life as well, and not take them so hard. I try take the same view in otas I do on my knitting, and I think it helps me to recover from a failure faster. I’m not trying to say I don’t get sad or disappointed, because I do. But it helps to think that in knitting, in the grand scheme of things and life, frogging a project isn’t that big of a deal. There will be another one, there will be another opportunity. Life is the same. Be sad. Be disappointed. But then put it in time-out and move on to the next bigger, better thing. And always remember, it’s not you, it’s the pattern.