People often ask me to knit things for them. It doesn’t happen as often as it did when I first started knitting (maybe because I often just smiled and nodded but never did anything beyond that), but every now and then it will happen. I know a lot of knitters get offended at that, or even more offended when people say things like “you should sell that,” but I don’t. I take them as compliments. It means whoever is taking the time to make those comments is impressed by my work, and I’m thankful for that. I know I tend to focus on the negative, and I have a hard time not pointing on my mistakes when someone compliments my work. But, I’m learning. 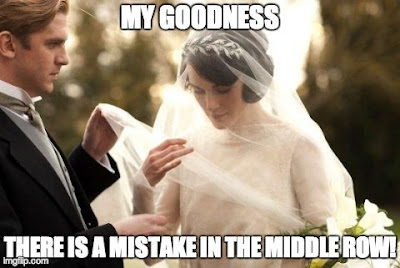 Because I have so many non-knitter friends, I thought I’d walk you through a small project for you to get a taste of what it takes to actually make something. Now, note, this is a very small project. So when you see me post pictures of a lace shawl that I’ve technically been working on for months (the last one took a total of 38+ hours of work to knit, spread out across a few months) you can see why I tend to smile and nod and go about my selfish knitting business.

First off, the yarn I used for this impromptu cowl is 100% wool (Bluefaced Leicester, to be specific) dyed by Sheepy Time Knits (an indie dyer) for her Middle Earth Yarn Club (it’s based on the red of Bilbo’s journal.) It cost $28 (although that does include shipping, in full disclosure.) This is about the average price for indie dyed yarns, although they can be even more expensive depending on the fiber and dyeing technique. (For reference, this does mean if you knit a pair of socks from indie-dyed yarn, you’re looking at a $22+ pair of socks, not to mention the hours/labor it takes to knit them.)

I use an app for my PDF patterns when I’m knitting called Knit Companion (more on that in a later post), and it has a nifty feature that tracks how long you’ve been knitting on a project. You do have to keep the app open the entire time for it to be accurate, which I made sure to do for this project. Here’s my screenshot of how long it took me to knit this particular cowl.

But knitting isn’t the end. Next, you still have to block it. Because if you don’t, it stays looking like this: 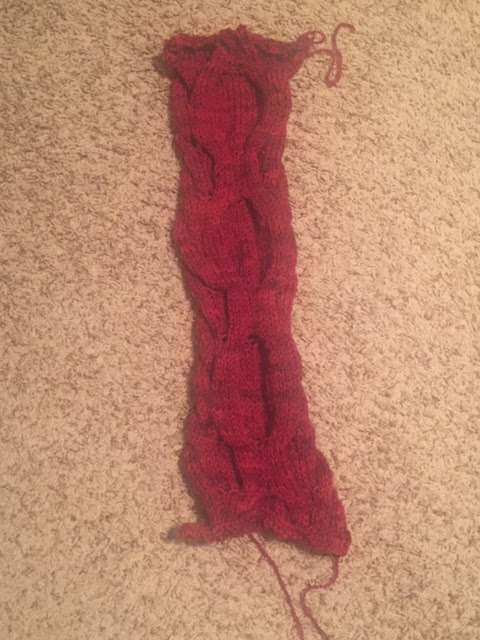 So I soak it using a wool wash in cold water for about 15 minutes: 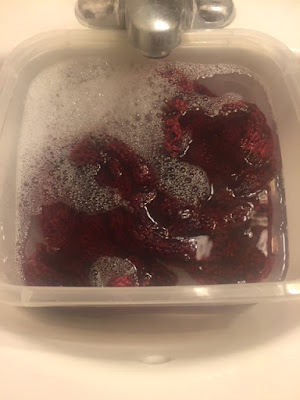 Afterwards, I drain the water (which of course has a lot of excess dye, because red dye bleeds a lot, so you have to be careful not to soak it with anything else or let the water splash while you drain it so other things don’t become red) and then roll it in an old towel to take out as much water as I can.

Then, I spread it across my “blocking mats” which are really just kid play mats, but work really well for blocking and are cheaper than what a lot of knitting stores sell. Then I pin it. I mostly use my Knitter’s Pride Knit Blockers, because they tend to make it a lot faster to make a straight edge than working with T-pins alone. But pinning something out like this is quick, compared to my last shawl where I had to use all my knit blockers, and most of my T-pins to get the edging to look right (probably took close to an hour to pin that thing out to try and get it as symmetrical as possible.) This particular project took probably about 5-10 minutes for me to pin out. 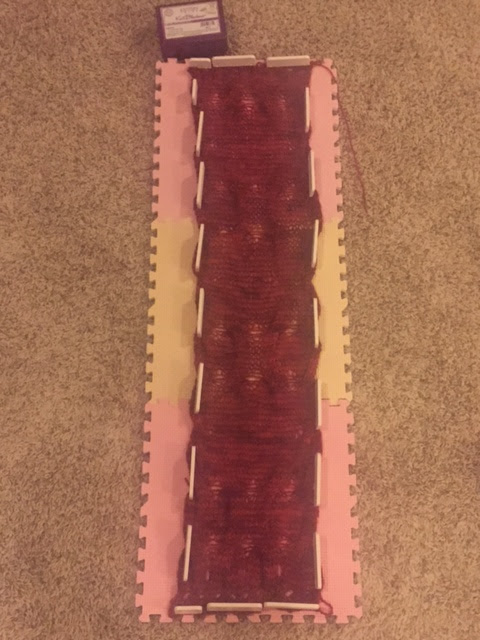 Then I wait for it to dry. Here in the desert, things tend to dry pretty quickly, but since this is thicker yarn, I let it sit over night just in case. I didn’t use starch on it because I want it to still be soft around my neck, but for things that desperately need to keep a certain shape, I use starch.

After it’s dry, then I weave in the ends. Thankfully only two on this project, but there can be a lot more depending on the project. Then I sew on the buttons, and then it’s finally ready for me to wear! 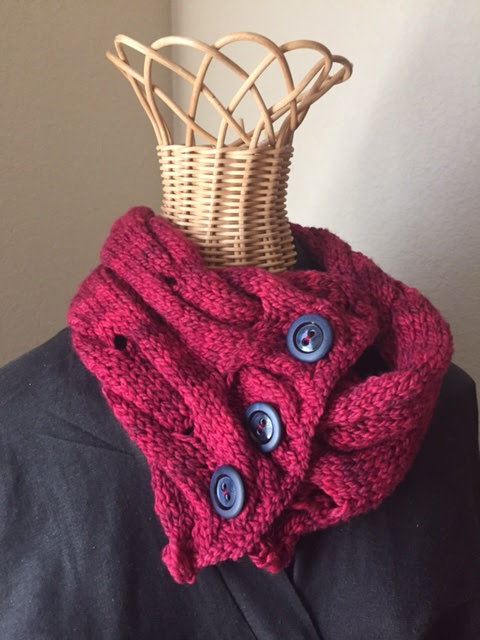 I know this doesn’t seem like it’s a lot. But it’s a 27 inch long cowl. Think about a fully cabled sweater, or a pair of socks (which uses really tiny yarn and really tiny needles) and you can kind of compare the amount of work it takes to make certain projects. It truly is a labor of love, which is why you may often hear knitters talk about people being “knit-worthy” or “not knit-worthy.”

It means we know you’ll understand how much work we put into your gift. It means we know you’ll take care of it properly and truly appreciate it. We want you to use it, though. We don’t want you to keep it hidden in a closet because you “don’t want to mess it up.” I want to see the blanket I made with holes in it, because it means that it was used and loved. I can always make you another one, or mend the one you have. You are more likely to get something else from me if I see you using what I already gave you, because it makes you more knit-worthy. I knit because I want to see my projects worn and loved. Sure I sometimes enter them in the state fair as show pieces, but that’s just for fun, and isn’t the primary reason I knit. I knit to show people I love them. You may think I’m “being cheap” by knitting you something instead of just buying it. But I promise you the amount I spend on yarn and the time I spend knitting it is a lot more than if I just clicked a button and ordered you something on Amazon.