A while ago, when I first showed off my enormous stash when beginning this blog, a reader asked if I could do a post that described how I organized it all. I said I would…and then never did (until now) because, to be honest, it wasn’t very organized.

I’ve said before, when I first started knitting, my husband bought me a cube storage thing to use. I promised I’d never have more yarn than would fit in it. That lasted about a year or so….

At a certain point, I just shoved yarn in tote bags and hid it in my craft room closet, because I really had run out of space to put things. It was honestly frustrating. But I am limited by the space that I have to store it, which isn’t very much, my budget, and of course the options for storage are limited in a city without something like an Ikea. We do at least have a Container Store now, but even the options there are just more plastic things. I didn’t want more tiny plastic things that wouldn’t really solve the problem. 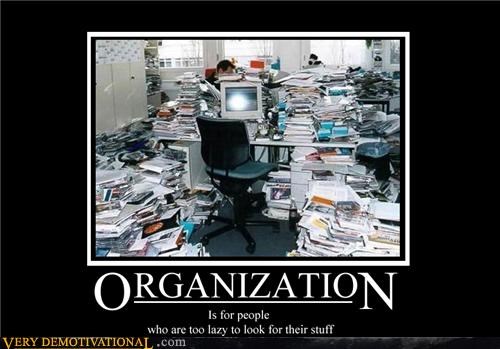 It was after Christmas, so Target was having a fantastic sale on the 66qt plastic storage containers, that presumably non-fiber artists use to store their Christmas decorations. I bought 10. And probably looked like a crazy lady with them stacked in my cart, but it was totally worth it. Then I did the thing where I went through my entire stash, donated a ton that I knew I would never knit, and reorganized it all. But I knew that just putting them in bins wouldn’t fully solve my problem, because each time I needed something for a project, I’d have to try and remember what bin it was in, so I needed to figure out a way to label them. 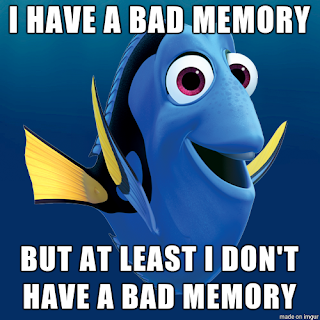 I didn’t just want “Bin 1” or “Bin A” because that was too boring for me. Instead, as you can see in the picture below (the only picture of what my stash organization looks like in this entire blog post), each bin is labeled with stickers from a particular fandom or genre. For instance, there’s Supernatural, Sci-fi, Fantasy, Harry Potter, Disney, and My Little Pony, along with one “Random Fandom” bin for all the other random things I like that don’t fit one of the other categories. 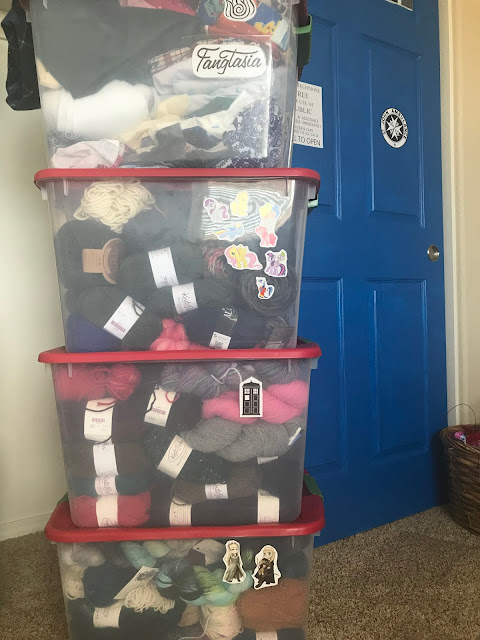 The yarn is organized based on size, since it’s easier for me to process that than by color. It’s also easier to organize this way, because you need less bins. Instead of having one for reds, blues, greens, variegated, etc., you just need one for each weight of yarn that you have. For a stash my size, some yarn weights span two bins because I have more fingering and worsted weight than any others. I did also combine sport/dk together because they’re similar, and I have so little of both that it seemed a waste to have separate bins for each. But I like that the bins are clear, so I can still see my stash if I want to, and it makes it a little easier to find what I’m looking for inside the bin, too. I put all of my fabric inside one, too.

After labeling them, I did the arduous task of making sure I had photographs of all of my yarn, and that all of it was entered into my stash on Ravelry. If you haven’t done this, there’s a really neat extra feature that really helps if you have a stash like mine. There’s a place where you can list where it’s stored in: 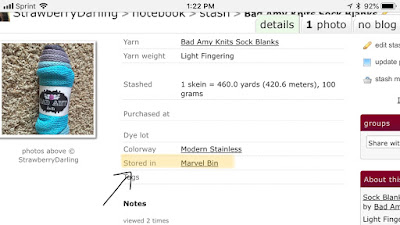 It was very time consuming to do all of this, but if you’re frustrated with your stash, I highly recommend taking a weekend and just doing it. It does save a lot of time and frustration with looking for things, and I like being able to just scroll through my entire stash on Ravelry to decide on projects. It’s much easier than digging through bins to see what I have that would work for whatever project I have in mind.

It may not be a very unique storage system, but hopefully it helps to see that even stashes the size of mine can be managed and organized. There’s also a really neat Ravelry thread where a lot of others have shared pictures of how they store their yarn, which I really enjoy looking through to get ideas for the future, too, in case I ever get tired of my current system.