So…long time no blog! I’m not proud of that fact, but unfortunately real life has made it hard for me to be creative lately. It’s been difficult for a lot of reasons. I’m not going to go into details in this post (maybe a future one) because I want to focus on my knitting for now. But there is a light at the end of the dark tunnel the past few months have been, so I’m slowly trying to get those creative juices flowing once again. And what better way to get back into the river of creative juice than by releasing a new free knitting pattern?

If you’re a fan of the Marvel Cinematic Universe (MCU), then you probably have heard that a little movie called Black Panther opened this weekend. I, of course,, have already gone to see it, and will be going to see it again since the husband is out of town right now, and I saw it without him, because I can’t be expected to wait to see a Marvel movie.

I am also the type of person who likes to re-watch the previous films before the new one comes out. Since Captain America: Civil War introduces Black Panther’s character to the MCU, I re-watched it to prepare for Black Panther‘s release. During my re-watch, I became inspired by T’Challa’s/Black Panther’s talon necklace featured prominently on his costume, and thus the Wakanda Forever knitted cowl was born: 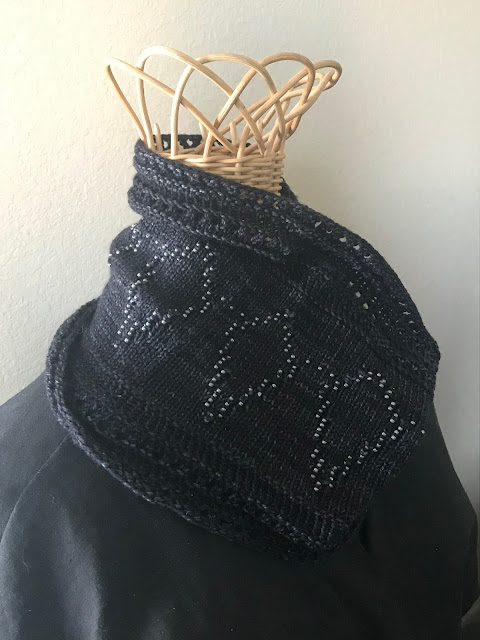 The cowl features a simple eyelet border (knit backwards at the top of the cowl for symmetry), and a repeated bead pattern to emulate the design of T’Challa’s necklace. 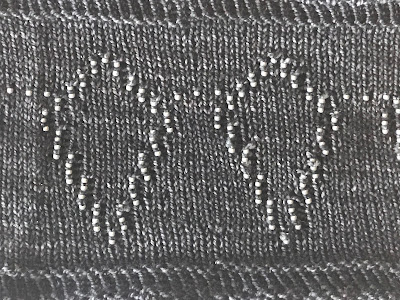 It’s a semi-close fitting cowl, but it can easily be resized. It’s technically a pattern repeat of 15 stitches, but since the border uses an even number of stitches, in order to resize the cowl, it takes adding/subtracting stitches in increments of 30 stitches. (Unless you feel like fudging the border a bit, and by all means go for it, you’re knitting it, not me!)

My cowl was knit in Madelinetosh Tosh Sock in the colorway Dirty Panther. I was a bit nervous that the semi-tonal nature of the colorway would hide the beads, but I’m quite happy with how it turned out. To mimic the look of the suit when charged with kinetic energy, purple ribbon can be woven in through the eyelet rows. 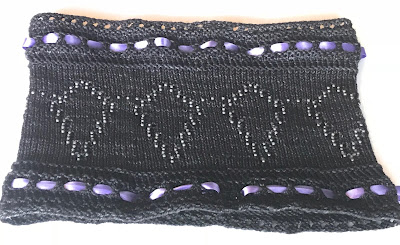 I should note, if you are going to make your own version of the cowl, unlike T’Challa’s necklace, this cowl will not enable a bulletproof cat-suit, will not store kinetic energy, and will not make you the protector of Wakanda. It will however showcase your love of Black Panther in a subtle way that only the initiated will recognize. For fun, here’s my favorite selfies of me trying to show off the cowl. It’s surprisingly hard to take decent selfies that also show off knitwear, especially when it’s windy outside! 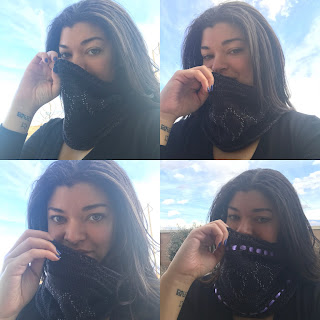 If you are interested in knitting your own version of Wakanda Forever, the free pattern can be found in my Ravelry store here. Happy knitting!